Shima Hayamizu (早水 海馬 Hayamizu Shima) was a member of the old Shōnen Hollywood. In the present, he still works in the showbiz as a music producer. His Hollywood Color was blue.

At some point, Shima joined Shōnen Hollywood and debuted alongside his teammates. Less than a year after the sudden death of their president, Shounen Hollywood disbanded while they were at their peak of popularity.[1] Each member followed his own path and Shima decided to continue in the showbiz.

Shima comes to the Hollywood Tokyo and meets with God. He complains that he is not happy with the new Shounen Hollywood because they were destroying the legacy of the previous group, in other words, their legacy. He also says that they disbanded in order to be eternal, but now the new group was changing that. Shima then asks God to give him the theater to remodel it and to make the boys even more famous,[2] but of course, they will have to change their name and he will add more members because they still were "unripe".

Shima dreams of bringing all the members of the old Shounen Hollywood together and plans to make an academy for idols in the theater, with his teammates as teachers and God as the director. 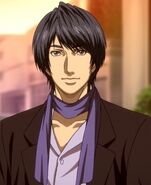 Retrieved from "https://shounen-hollywood.fandom.com/wiki/Shima_Hayamizu?oldid=5654"
Community content is available under CC-BY-SA unless otherwise noted.