Shōnen Hollywood was created by the Former President. At some point, all the members joined and debuted together. However, less than a year after the sudden death of the president, the group disbanded while they were at their peak of popularity.[1] The president's death caused a big impact on them and triggered their sudden decision to disband while they were at their peak of shine, popularity and brilliance, because Shounen Hollywood was the the president's dream and they wanted it to be eternal.[1] 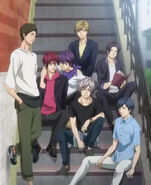 Retrieved from "https://shounen-hollywood.fandom.com/wiki/Sh%C5%8Dnen_Hollywood_(old)?oldid=5578"
Community content is available under CC-BY-SA unless otherwise noted.