Daiki Tomii (富井 大樹 Tomii Daiki), nicknamed "Mii" at first, is one of the members of Shōnen Hollywood. He is a big fan of the old Shōnen Hollywood and would like to become just like them. His Hollywood Color is yellow.

Tomii has dark blonde hair and golden eyes. His hair is the messiest among the others, as the ends stick up more than Shun's. His fringe is parted to the rightand he wears an orange and black jumpsuit with an orange shirt underneath.

Tomii is a enthusiastic, easy-going, cheerful, caring and sometimes childish person which leads him to be a bit naive at times. He is usually found with a smile on his face. Because of his cheerful personality, he can get along well with children and is good friends with the kids at the orphanage. Although he's usually cheerful, Tomii can end up snapping and being noticeably less pleasing under pressure, as seen on some later episodes.

Tomii is a big fan of the previous Shōnen Hollywood and joined the idol industry because of that. The brightest member of the group, he serves as their good luck charm.

Tomii has been living at Yamabiko Friends, an orphanage, since he was five years old.[1] It's unknown how he ended up at the orphanage or what happened to his parents. He became a fan of Shōnen Hollywood when Minoru Tomii (the first Tomii of of Shounen Hollywood) came to visit Yamabiko Friends, where he used to live in too. Minoru saw a young Daiki playing on his own and he encouraged him, promising him that in the future Daiki will also make a lot of friends.

Tomii sends Minoru a letter and tells him about that he has joined the new Shounen Hollywood. After Minoru recieved the letter, he visits Hollywood Tokyo to meet Tomii (when he was still known as Mii). There they talk about the old Shonen Hollywood members and Tomii learnt that his predecessors dreams never came true. Minoru encourages Tomii and hands over the baton as "Tomii, the Good Luck Charm" to his junior, meaning he will become the new Tomii of Shounen Hollywood.[1]

Tomii deeply respects and adores Minoru and in return, he favours his junior. Minoru was the one who helped Tomii get to play a character in the Migratory Bird Cop drama, although that made Tomii feel guilty.[2] Despite having the same last name, they are not related.

Tomii and Kira seem to get along quite well, despite Kira saying he doesn't like any of the boys in particular. During the summer camp, the two of them tried to play a prank on the other members while they slept.[3] Kira also helps Tomii with practice and encouraged him during his time in Migratory Bird Cop. 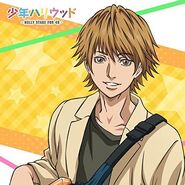 Retrieved from "https://shounen-hollywood.fandom.com/wiki/Daiki_Tomii?oldid=5677"
Community content is available under CC-BY-SA unless otherwise noted.